Trials running a Bergen gas engine on a blend of green hydrogen and natural gas have been successfully completed at Viscofan, the international meat products processor, at its Cáseda plant in northern Spain last month. It is the first time a Bergen engine has run with hydrogen in a full-scale industrial application. The trial confirmed laboratory tests that the engine performs normally in real-life conditions and that Viscofan can potentially save almost 8,000 tonnes of CO2 emissions per year from its operations.

In recent years Viscofan has renewed its co-generation installation in Cáseda with the latest Bergen engine technology which capable of running on natural gas and hydrogen in variable percentages. The objective of the Cáseda trials was to measure efficiency and reliability of the engines in real-time continuous use. Fuel blending was carried out to reach a mixed value of 15% hydrogen and 85% natural gas in an engine of the Bergen type B36:45L6AG producing 5.5MW of output in combined heat and power (CHP) configuration. To carry out these tests, Viscofan’s managers and cogeneration team had the collaboration of a team of Bergen Engines technicians from Norway and the company’s Spanish subsidiary.

The green hydrogen used was provided by Electroquímicas de Hernani with the support of Nippon Gases in charge of the temporary installation, transport and supply of the gas. A temporary installation of two hydrogen semi-trailers with an approximate capacity each of 4,000 Nm3 of compressed hydrogen at 200 bar, progressively increasing hydrogen flows of 400 Nm3 / h were used. The use of hydrogen as a fuel significantly and immediately reduces the carbon footprint of the combustion processes, since each cubic meter of natural gas replaced stops emitting 2.15 kg of CO2 into the atmosphere. All this equates to a saving of 63 tons of CO2, equivalent to more than 7,660 tons of CO2 per year.

For José Antonio Canales, CEO of the Viscofan Group, “These tests, in addition to being a historic milestone in our decarbonisation project, also represent the confirmation that Viscofan is already prepared to lead the energy transition. Our will and commitment to the consumption of green hydrogen must be accompanied by unresolved challenges such as the production of green hydrogen at a competitive cost and continuous transport to our facilities.

Jon Erik Røv, CEO Bergen Engines AS, says “We are very satisfied with the result of this trial and the excellent collaboration with Viscofan. It confirms Bergen Engines’ firm commitment to continue developing the technology necessary to ensure the best efficiency and the use of hydrogen in our engines.” 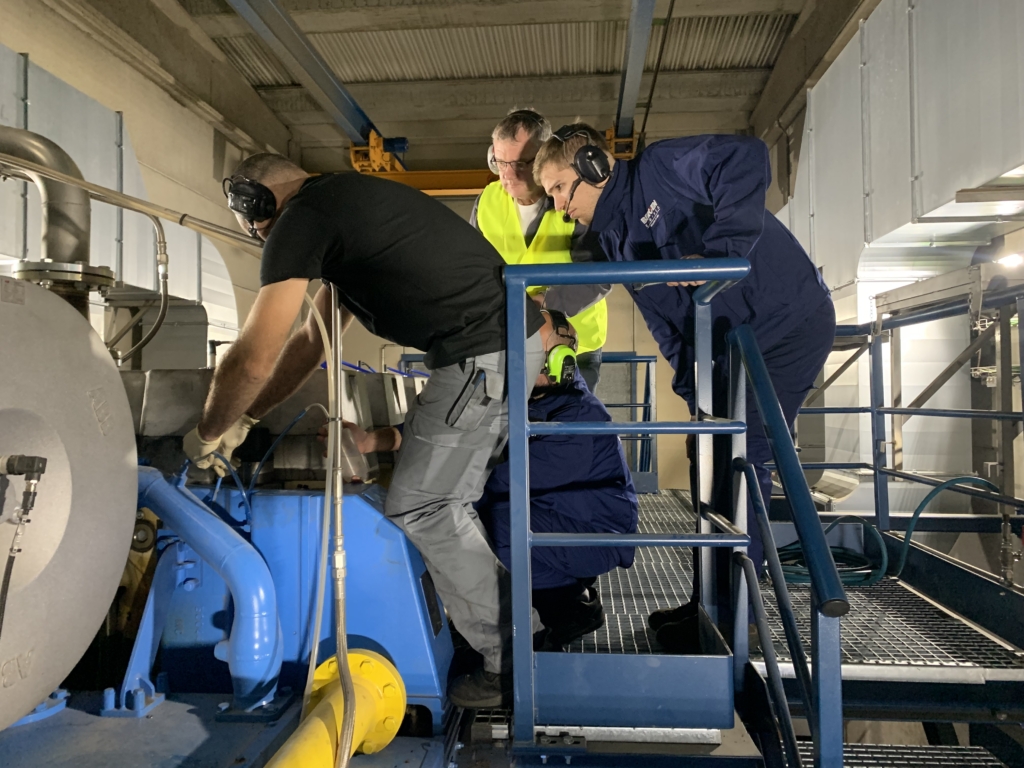 Bergen Engines produces medium speed liquid and gas fueled engines and generator sets supplied to a broad range of land based, commercial marine and naval customers. The Bergen name is a watchword for quality and reliability in its field.

The tradition of engineering in Bergen, Norway, dates back to 1855 when the original company Bergen Mekaniske Verksted (BMV) was founded. In 1946 the company built its first diesel engine and has since commissioned over 7,000 of its iconic liquid and gas fueled engines. More than half of them are still in operation today, such is the quality and reliability of a Bergen engine.

From 1999, Bergen Engines AS was owned by Rolls-Royce plc. On 31st December 2021, the company was sold to the privately owned engineering and industrial group, Langley Holdings plc. Bergen Engines is a member of the group’s Power Solutions Division, along with the Italian Marelli Motori and German Piller Power Systems subsidiaries.

Viscofan, listed on the Continuous Market (SIBE: VIS), has as its mission to satisfy the needs of the global food industry through custom-made casings, an essential ingredient for the food sector when producing sausages, cold meats and other foods. Thanks to the hard work and passion of its team, the Viscofan Group is now the international leader in meat casings with distribution in more than 100 countries around the world, generating sustainable value for its stakeholders. In 2020 Viscofan achieved revenues of 912 million euros and a net result of 123 million euros.

The group’s operations are based in Germany, Italy, France the UK and Norway, with 18 production facilities in Europe, the UK and the USA.

The group more has more than 90 sales and service subsidiaries worldwide and employs around 5,400 people.

The group was established in 1975 by the current Chairman & CEO, Anthony Langley and remains entirely in family ownership.