Langley Holdings has completed the acquisition of the Norwegian Bergen Engines group from Rolls-Royce for a consideration of €91 million. In addition, €16 million of cash held within Bergen Engines AS, has been retained by Rolls-Royce.

Completion of the transaction, which was announced on 3rd August 2021, follows the conclusion of work to separate the business from the Rolls-Royce group.

As of 31st December, 2021, Langley formally acquired Bergen Engines AS as a stand-alone group including its engine factory, service workshop and foundry in Norway; engine and power plant design capability; its global service network and subsidiaries in nine countries.

In 2021, Bergen Engines generated revenues of approximately €250 million with the assets and liabilities of the business presented as held for sale in the Rolls-Royce Holdings plc consolidated balance sheet.

The Bergen Engines group employs almost 950 people worldwide, of which more than 600 are based at its headquarters and production facilities near Bergen, in Norway.

Going forward, Bergen Engines will be operated as a stand-alone business unit focused – in addition to its traditional markets – on the rapidly developing microgrid power generation sector, an area central to Langley’s net zero strategy.

“The acquisition of Bergen Engines is a major step towards our net zero objectives. The company has a superb reputation and is proving to be highly innovative in adapting its engines to low-carbon and non-fossil fuels. Coupled with that, the emerging microgrid sector fits perfectly to our long-term sustainability goals.” He said.

Visiting Bergen Engines last October, Langley gave the go-ahead to a €4 million research project to be funded jointly with the Norwegian government. The AMAZE (Ammonia Zero Emissions) project is developing the use of ammonia as an alternative fuel for ship’s engines.

The Power Solutions Division is expected to generate around €600 million of Langley’s anticipated €1.3 billion revenues in 2022. The Division employs around 2,400 of the group’s 5,600 total global workforce. 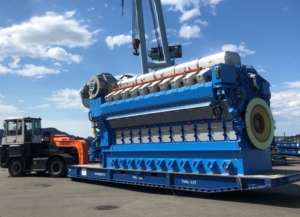 A Bergen engine leaves the factory in Norway by truck. 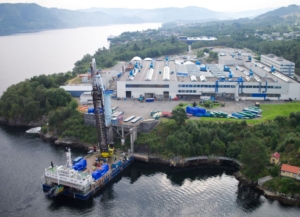 Multiple engines are loaded from the company’s deep water wharf for onward transportation by ship.

In 1946 the company started to build diesel engines and has since commissioned over 7,000 of its iconic liquid and gas fuelled engines. More than half of them are still in operation today, such is the quality and reliability of a Bergen engine.

From 1999, Bergen Engines AS was owned by Rolls-Royce plc. On 31st December, 2021, the company was sold to the privately owned engineering and industrial group, Langley Holdings plc.

Langley businesses are either outright market leaders, or occupy strong niche positions in their respective fields, providing advanced technologies in a solutions-based approach.

The group’s principal operations are based in Germany, Italy, France the UK and now Norway, with 18 production facilities in Europe, the UK and the US and more than 90 sales and service subsidiaries worldwide employing over 5,600 people. Revenues for 2022 are expected to be around €1.3 billion.

The group was established in 1975 by Anthony Langley, the current Chairman & CEO, and remains in family ownership.