Zero carbon on the horizon

The pace of change towards a net zero carbon future needs to increase to meet the goals set forth in the Paris Agreement and to protect our planet from dramatic climate changes. To cater for stricter emission regulations and future changes in fuel supply, while also avoiding stranded assets, we believe it must be necessary to convert gas engines to green fuels at a later stage. This is where the built-in flexibility of our Rolls-Royce Bergen engines will come into play.

In Rolls-Royce we are committed to developing flexible and clean power solutions that will enable and sustain the energy transition.

The latest reports from DNV GL1 and IEA2 foresee a significant increase in the share of renewable energy sources, in particular solar PV and offshore and onshore wind, towards 2050. At the same time, a large amount of conventional coal-fired power generation will retire. To improve energy efficiency, there will also be a shift towards electrification in general, with an immense increase of electric vehicles worldwide.

The demand for electricity is bound to remain high due to the growth in emerging economies and their need to electrify, and intermittent renewable energy alone will struggle to deliver all the power that is needed. Battery storage, demand side response, improvements in energy efficiency, and Power-to-X (synthetic fuels produced from renewable energy) are some of the many options to support renewables in a low-carbon manner.

Natural gas-fired reciprocating engines from Rolls-Royce Bergen are a cleaner, affordable and energy efficient alternative to fill the gap from coal fired-generation. According to the experts in DNV GL1, gas-fired generation, as the cleanest fossil fuel, will continue to play a role towards 2050.

With heat recovery, the efficiency is beyond 93%, GHG emissions are lower, and there are no emissions of particulate matter. The engines can run 24/7 to deliver baseload power, or they can kick in quickly whenever extra power is needed to stabilize the grid.

Rolls-Royce Bergen was a pioneer in developing modern lean-burn gas engine technology which has been applied to several hundred engines to date, proving their reliability over millions of running hours. Technological improvements have been introduced consistently since the first gas engine was released to the market in 1991. In fact, this first gas engine is still in operation. A simple and robust design ensures high availability and efficiencies of up to 50% with single-stage turbocharging.

Rolls-Royce Bergen develops sustainable power solutions that enable the shift towards net zero carbon. We are in the process of future-proofing our engines by enhancing their flexibility so that they can run on various fuel types as the fuel availability landscape transitions towards lower carbon fuels.

The modular architecture of the engines allows for minor and major reconfigurations of the engine’s combustion system. We are committed to giving our customers across the power generation and maritime markets the assurance they need to proceed with their investments. Our engines typically operate for between 20 to 25 years, and the modular architecture ensures that a gas or liquid fuel engine purchased today will be just as relevant in one or two decades.

The European Union considers hydrogen as essential to reducing emissions from industry, transport, power generation and the built environment, and believes in its function as a vector for renewable energy storage (2). Existing gas pipelines could be repurposed for the transport of hydrogen, and the EU’s strategy is to build a full hydrogen ecosystem in Europe.

Rolls-Royce Bergen has tested gas engines with fuel gases containing up to 60% hydrogen. We are currently engaging in European projects studying the effects of blending hydrogen in the fuel gas of standard natural gas operated engines. Pilot tests will be run in our engine lab and on existing power plants.

The re-configurability of the latest Bergen B36:45 gas engine series allows for an evolution of the engines as requirements change. Starting out from the current natural gas engine, a certain amount of hydrogen admixture can be allowed without any changes to the engine. To increase the hydrogen admixture while maintaining performance levels, the engine software must be tuned.

Rolls-Royce is aiming to have a commercial retrofit solution that will accept a Hydrogen content of up to 60%, and that can be developed to accept 100% for new engines to come. This engine solution will be equally suitable for maritime applications.

The maritime fuel of the future

Direct electrification through batteries is likely to become a good choice for short distances, such as for ferries and harbour tugs. For long haul transport however, ammonia is a good bet as the fuel of the future. It is a favorable fuel consisting of Nitrogen and Hydrogen only. Also, the existing large global production capacity will be scalable to the required volumes, with costs depending on future pricing of (green) hydrogen.

Rolls-Royce is exploring several pathways towards ammonia-fueled engines and is collaborating with other industry partners to find the best overall system solution. Both Otto and Diesel-principle engines hold promise as ammonia burning engines. Rolls-Royce Bergen is working on systems for both types, ensuring that the engines are more fuel flexible going forward.

The diesel engine is particularly robust when exploring fuel quality variation. Therefore, we are developing a highly flexible dual-fuel engine that can be rebuilt to burn ammonia, methanol, hydrogen and other synthetic fuels, in addition to being a host for hydrocarbons (gas, LPG etc). The project is a joint effort with other industry partners including relevant technical universities.

The programme opens up the possibility of developing retrofit solutions (conversion kits) for engines in operation. Successful conversion of the existing fleet will accelerate the overall transition to low carbon, and ultimately zero, emission fuels.

Reach out to our experts in Rolls-Royce Bergen to discuss the best solution for your specific project. 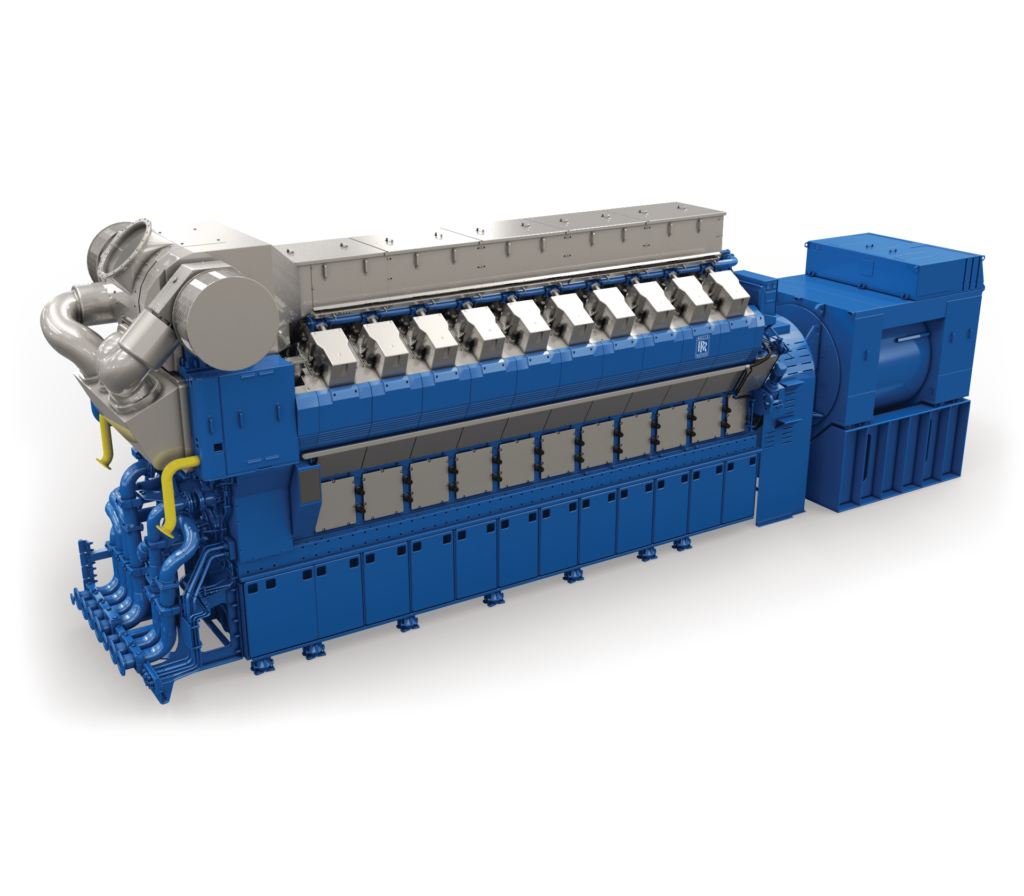